When Reverend Msgr. Richard Murray was sent to open a new parish at the west end of the San Fernando Valley, he was focused on creating a close-knit community. The first priority was building a school for the children of the parish’s young families. Groundbreaking for the first building of the two-building school took place in March of 1964. The eight-room school opened in September of 1964. The enrollment was 384 students. Encouraged by the school’s early success, Msgr. Murray spearheaded the construction of a second classroom building.

When it was completed in the spring of 1966, the school had room for 650 students. In 1968 the Sisters of Notre Dame came to staff the school, along with lay faculty. By that time the school had two rooms of each grade, one through eight, with an enrollment of 607. Due to the decrease in religious vocations, the Archdiocese of Los Angeles encouraged schools to downsize to single grades in order to keep Catholic education affordable for families while paying an increasing number of salaries for lay teachers.

In the fall of 1971, St. Bernardine of Siena School began phasing out the double grades. The last double grade was phased out by June, 1978. In the fall of 1982, a kindergarten was inaugurated. Because of a personnel shortage, the Sisters of Notre Dame withdrew from the school in June, 1990.

Since its founding, St. Bernardine of Siena School has had a strong commitment to forming students in the Catholic Faith and providing the highest level of academic excellence. Historically, students graduating from St. Bernardine of Siena School have consistently been accepted into Notre Dame, Chaminade, Louisville, Crespi, Loyola, Bishop Alemany and La Reina Catholic High Schools. Graduates have gone on to outstanding colleges and universities such as Notre Dame, U.S.C., U.C.L.A., N.Y.U., and M.I.T. to name just a few. Most importantly, graduates have gone on to become successful, faith-filled leaders in the local, national and global community. 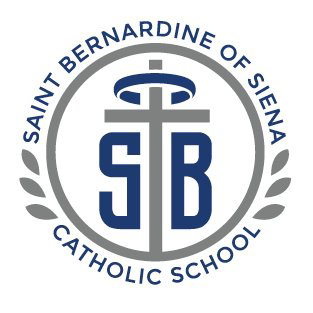